The Italian education system has made enormous efforts to adapt to the needs of the lockdown, but in order to truly affirm the right to an education linked to the labour market and the digitization of schools, the system needs strong reforms. Global Thinking Foundation is helping spread financial education throughout Italy and beyond with an international women’s project .

A Country that destroys its education never does it just for money, because resources are lacking, or costs are excessive.

A Country that destroys education is already governed by those who have only to lose from the spread of knowledge.

The results of the survey “Financial Literacy in PISA 2018”, published on 7 May, regarding the skills of 15-year-old students, leave no room for doubt, if ever there were any, highlighting  that the level of financial skills, achieved and necessary for the transition from compulsory schooling to higher education, to work and everyday life, is below the OECD average and deteriorating compared to 2015.

The results show that 1 student out of 5 does not possess the minimum necessary skills, and Italian students score lower than other OECD countries with the same score in mathematics and literature. Furthermore, a gender gap still exists only in Italy and  in two other countries. The other results are based on Families and teachers as primary reference points of their education as well as  on the internet.

The OECD  stresses this further in the Skills Outlook 2019 report, arguing that the Italian population lacks basic digital skills, both students and workers. And as many as 3 out of 4 teachers, 75.2%, admit that they need specific training in the digital field, i.e. ITC, to be able to carry out their profession. If we then look at a small 25% of Italian workers who use office software and 40% who claim they are not able to make efficient use of digitized work programs, it is clear that we must start from schools to change the programs that are still stuck to  the skills needed decades ago.

On top of this, even in the European “Women in Digital” scoreboard, Italy lags behind on all 13 indicators that measure the inclusion of Women in digital jobs, careers and entrepreneurship.

According to OECD experts, in order to fill these gaps, a multidisciplinary approach should be adopted to create national financial education strategies that support young people, by capitalising on the opportunities offered by digitisation to provide training, especially in this emergency context, and preserving the construction of good financial education habits at family and school level.

Remote teaching: “Give me a break!”

Before the outbreak of the pandemic, according to Agcom, 47% of teachers was making use of digital tools on a daily basis and two-thirds of schools had a stable connection capable of including teaching activities based on digital tools. Moreover, in the last 5 years the use of digital school registers has grown from 69 to 84% of schools. Based on these data, the turning point for an integrated and complementary use of interactive digital tools at school, alongside a more traditional approach, seemed to be a growing reality.

But there are still many regions with schools that cannot have or afford a connectivity index close to the average. This is not simply due to a lack of resources, but, most notably, to a lack of “technological infrastructure and broadband connections”, from the  country’s Southern regions to Lazio, Veneto and Sardinia. The process of school digitization in Italy has been slowed down for more than a decade  by two factors: the failure to fully implement the National Digital School Plan of 2009 of the Ministry of Education, according to which by 2020 all schools would be equipped with broadband, and the delays of the policy on the Ultra Broadband Plan.

What this means, therefore, is that the digital infrastructure must be functional and integrated with teaching on the one hand and learning on the other. It is useless to have digitized facilities or Wi-Fi coverage in all classrooms if the teaching format, as we have seen, remains stuck on past models.

But be careful to think that Remote Teaching is the answer to our problems in order to hide under the carpet the urgency to face a structural and long-term reform of the School.

The Italian education system has made a huge effort to adapt to the needs dictated by the lockdown, but a Strategy is also needed for Remote Teaching, not just as an accessory of last resort not to lose the legacy of this experience, but  for a future of students in an inclusive and sustainable society.

When Rights become Voices and emerge from silence

Gender inequality is a reality in our Country, notwithstanding Article 3 and all the other articles of our Constitution that provide no justification for wage differences and for the exclusion from the labour market, or rather for  the persistence of obstacles that are economically and socially counterproductive. And like other inequalities, in this era of COVID “resistance”, they are a social cost that we cannot afford, because a real economic recovery needs everyone.

A widespread social welfare, however, in a Country where 12 million taxpayers did not pay the IRPEF in 2019, and  where 6% pay 40% of the total IRPEF (with a tax return that exceeds 50,000 euros), becomes a chimera, and it is obvious that only the broadening of the tax base will  save us from a welfare drift that does not generate sufficient  growth, births and development to recover  from an economic depression  which this year is expected  to exceed -9%.

The words of Philip Lane, Chief Economist of the ECB, at the latest press conference, underlined a fundamental concept, dear to Draghi and present as a mantra in his speeches of the last two years, that Governments must act on the fiscal leverage and the labour market, with support measures and far-sighted reforms.

On the Italian debt, the economist reassures everyone saying that for Italy, like China and Japan,  when the huge debt is held mostly by citizens, (in Italy only 30% is in foreign hands, the rest being distributed between  the ECB and nationals)  it does not create pressure on the economy. But that burden, which in 2020 is estimated  to exceed 45,000 euros per capita, and the forecast of  its reaching 160% of the debt/GDP ratio, is a mortgage on the heads of young people and their right to study and work.

The Right to Education is a priority, and we have seen it as such for most European countries where the urgency for an effective plan that looks not only at economic and social activities but also and above all at school activities, is aimed at avoiding psycho-physical disorders to the youngest and their families, because health is also this. Thus, providing for staggered  school openings, based on  regional and social data for the most fragile areas of the country, is a dutiful act of responsibility that cannot be bypassed with a simple and illogical: “Let’s reopen in September, perhaps … maybe even October 1!” Such statements without feasibility, aimed only to test people’s reactions are not worthy of a Country that is said to be developed, and to be part of the G7.

An ambitious but serious plan of gradual reopening, based on long-term planning, is only right and the lack of information and clarity creates neither expectations nor prospects, but only discouragement for families, especially for women who have seen their care time doubled.

The Right to Education, with services and programs adapted to the needs of the labour market,  both academic and family, together with the digitization of schools, are two important levers of an unstoppable and respectful change for all. Likewise, the introduction of financial education and digital skills is the perfect combination to promote the liberation of the new generations in our Country from worrying and unacceptable data.

Arguably, increasing the knowledge of young people is a commitment that we have taken with Global Thinking Foundation, an international project that sees us engaged on the national territory and not just to support and work together with families to spread a basic financial education, starting from girls, working women, heads of families dedicated to building a peaceful future without accepting being in the limelight only as a “social benefit”, the cheapest one! 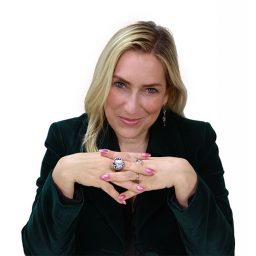